You are here: Home > Sterling Taylor 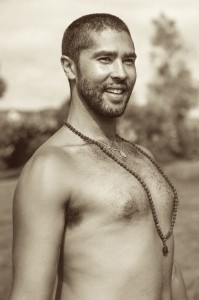 Sterling’s love affair with yoga began in the late 90’s when he attended his first power yoga class at his local gym in Monterey, CA. His respect for yoga deepened after a 30-day Bikram yoga challenge in 2009 in New York City. He began to notice positive changes in his physical body and a calmer emotional state of being while at work and in his general day-to-day activities. Life proceeded to get in the way, as it often does, and he lost connection to his yoga practice until 2011, when it was reawakened by Coral Brown. Lying in Savasana (final resting pose) in a sea of his own sweat, Sterling felt high on life. In that moment, Sterling knew his calling was to help share this experience with others. He signed up for yoga teacher training with Coral that night and completed her 200-hr Pranaflow Teacher Certification Program in 2012.

As Sterling continued to explore more and more yoga subcultures in the thriving SF Bay Area yoga scene, he experienced his first men’s naked yoga (MNY) class with Bryan Harrelson in January of 2013. His heart was anxiously beating out of his chest and his mind was racing so fast at the beginning of class that he could barely comprehend the experience until he arrived in his Virabhadrasana I (warrior 1). There in Virabhadrasana I, for the first time ever, he felt completely comfortable in his own skin. Sterling led his first MNY class in August of 2013. He co-hosted his first Open Body Yoga Retreat with Tim Luddy and Matt Van Horn in July of 2015.

I've been going to Naked Yoga now for about a year and a half and I love it. All the teachers have a different style and are great in their own ways. It is a completely liberating experience and I always leave feeling rejuvenated. The environment is always respectful and the people that attend create a wonderful social atmosphere. After having attended this studio, I have a hard time ever wanting to do yoga at another location or with my clothes on. Can't recommend this studio and these teachers enough!  -Daniel

"Peter Wong's Restorative Yoga class [6:30p.m.-7:45p.m. on Saturdays]  carries me away from the everyday and deep into myself and the harmony of my being, connected and singing in the vast beauty of the universe. After class, no doing, just this timeless being."  - Bill Meyer

Great yoga classes! Great instructors who offer lots of advice and feedback. Love the freedom and safety of practicing naked.

I never seem to comprehend the phrase "perfect yoga voice" until I practice yoga with Ken, both in an individual basis and in class. His gentle, soothing, yet deep and confident voice makes yoga directions easy to follow. Aside from his voice, he is very patient and understands the needs of his students and gauge the intensity of the class quite well. In a class setting, he would provide several alternatives to a yoga pose that accomodate the different level of yoga practice between the students. In other words, whether you are a new yoga student or someone that practice it for a long time, you can still benefit from taking his class. Ken is warm and friendly and certainly provide adequate attention for new and returning students. I thoroughly enjoy his classes as I have seen great improvement in my flexibility and coordination over the past year. I am an exercise physiologist and I usually recommend clients to practice yoga as part of his/her flexibilty training component and Ken would be the top name on my list whom I refer my clients to!    -Tim